FULL ARTICLE: The Verge: Google is opening its first physical retail store this summer in NYC 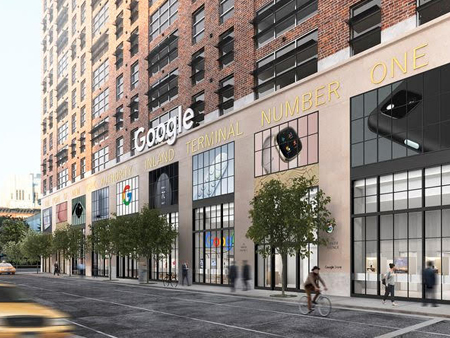 Google plans to launch its first brick-and-mortar store this summer in Chelsea, where it has been steadily growing its office presence during the past decade.

Executives with the search giant detailed the plans to Crain’s for the 5,000-square-foot store at 76 Ninth Ave., part of the former Port Authority building purchased by Google for $1.9 billion in 2010. The store—which does not yet have an opening date—will showcase, sell and repair the Nest thermostats, Pixel phones, Fitbits and other physical products sold by Google, the executives said.

The plans show Google betting on in-store retail at a time such businesses are still reeling from closures driven by the Covid-19 pandemic.

“We’ve seen that there is a segment of our customer base that really wants to be hands-on and experience our products,” said Jason Rosenthal, Google’s vice president of subscription services.

The plan is to open within the next few months, with social distancing and masks required—though Rosenthal said Google will monitor health guidance and could adjust its policies. Gov. Andrew Cuomo cleared retailers to drop mask requirements for the first time Wednesday.

The physical store marks a new experiment for Google. The company has run pop-up shops in major cities for product launches in the past. In 2018 it considered opening a store in Chicago but backed off the idea a year later.

Google said chose Chelsea for the location as a way to place a new stamp on the neighborhood, where the company already employs more than 11,000 people.“We want to give New Yorkers and visitors a way to directly interact with Google in a way that hasn’t been possible before,” Rosenthal said.

The site sits at the eastern end of the 3 million-square-foot office building at 111 Eighth Ave., which Google bought a decade ago. Google also bought the Chelsea Market building across the street for $2.4 billion in 2018.

Google is also building out office space at the St. John's Terminal building in Hudson Square—which could be fully occupied by 2023—as well as at nearby Pier 57. The company has a total of 1.7 million square feet in the city.

New York, June 2021 — Suchi Reddy (Founder, Reddymade Architecture and Design) and Ivy Ross (VP of Design, UX and Research, Google Hardware) have worked together to create Google’s first physical retail space, in New York. Opening on June 17, 2021 on the ground floor of Google headquarters in Chelsea, Manhattan, the new retail experience is built on the core principles of Neuroaesthetics, which Reddy explored in her 2019 collaboration with Google, A Space For Being, at Salone del Mobile in Milan.

Reddymade’s work follows the belief that “form follows feeling. Good design, calibrated carefully to the human, positively influences wellbeing, creativity, and productivity.” The architecture and interiors of Google’s first physical retail location on 9th Ave. and 15th Street are a playful and pragmatic expression of this motto, bringing a unique focus to the interplay of good design with human perception. Reddymade’s space re-awakens visitors to the childlike wonder found in the technology and digital innovation on display.

Google’s first retail space is warm and calming, novel yet useful. Abounding in soft, tactile surfaces such as cork and wood, Reddymade’s design puts the visitor at ease, welcoming those seeking help alongside those pursuing their curiosity. A gravity-defying metal line twists its way through the room, introducing the intuitive whimsy of unexpected connections and free-form play, while defining spaces for living.

The warm lighting and neutral tones guide the eye to the “Imagination Space,” standing at the entry way to the store. A semi-circular node of extruded glass tubing suspended between the ceiling and the floor refract the light and invite visitors to interact with Google’s Google products and technologies on an individual level in human scale and experience the possibilities of technology.

A nod to New York’s windowshopping traditions, Reddy has installed a series of lit window boxes on 9th Avenue, which captivate observers, displaying Google products while showcasing a special technology that allows an AR interaction with the products on the interior.

The Google Store Chelsea has been designed according to the highest standards of sustainable and renewable practice and has received LEED Platinum certification. Notable materials in the space include cork furniture; flooring made from 100% recyclable material using factory waste in production with chemical free maintenance; low-VOC material wall panels made from 100% PET plastic, containing at least 60% post-consumer content; and, carbon neutral floor coverings verified by the Interface Carbon Neutral Floors Program of Bureau Veritas.